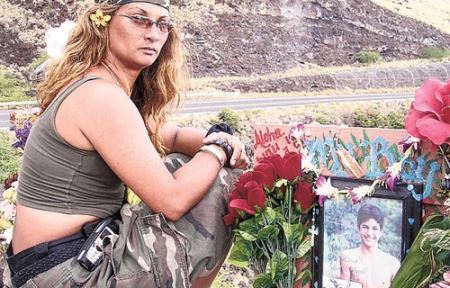 A dangerous scenic Maui overlook remains open despite a $3.2 million court decision that found the state liable for the death of a 16-year-old in a car that plunged off the cliff, according to the teenager’s mother.

“It has not been blocked,” Karen “Kalena” Dougher said Thursday. “I don’t understand that at all. They should close it off permanently so no other family has to go through what I and my daughter went through and still go through.”

In his 200-page decision, Cardoza found the state “solely and wholly” liable for the deaths.

Makekau was riding with Callo, 34, on April 13, 2005, when the car Callo was driving made a turn on the overlook next to the Lahaina pali and plunged 150 feet down a cliff. Both were killed.

Tiffany Romena was in the front seat, and her 3-month-old daughter, Kaila Kuu­lei Callo, was in a rear car seat. Both survived the accident, and rescuers found the infant crying and relatively unharmed in the back of the car.

Joshua Wisch, a spokes­man for the state attorney general, said his office was disappointed with the court’s decision.

“The state presented substantial evidence at trial to show that it was not at fault,” Wisch said. “The official police investigation concluded the driver was almost three times over the blood alcohol legal limit, had been smoking marijuana with the passengers, and actually drove off the cliff.”

A medical examiner at the time found Callo had a blood-alcohol level of 0.27 percent.

Wisch said the state has 30 days to decide whether to appeal.

Attorney Michael Livingston, representing the Dougher family, said Cardoza found that with or without the use of alcohol and marijuana, those in the vehicle would have fallen over the cliff because the overlook was hazardous and the earth beneath the vehicle was unstable and had buckled.

“That kind of pulled the vehicle over the edge,” Livingston said. “He found ultimately that it (marijuana and alcohol) did not contribute to the tragedy.”

Attorneys on behalf of the Make­kau and Callo families alleged the overlook was left open to the public, had no guardrail, and signs were never installed warning of the dangers.

Dougher said last week was the seventh anniversary of her son’s death, and she revisited the site for the first time in seven years, as the court decision neared.

“I feel justice has prevailed. Yet, it’s so hard to describe what that feels like. There’s nothing that can compensate for the loss.”

She was on a spur-of-the-moment road trip to Hana when she got the call Wednesday from Livingston about the ruling.

“For seven years I didn’t see the beauty in our islands anymore, and in life,” she said Thursday. “The island is beautiful because I can let my son rest. That’s what it’s about: finding peace and beauty in life again.”

“It’s very bittersweet,” she said. “There’s nothing that can bring him back.”