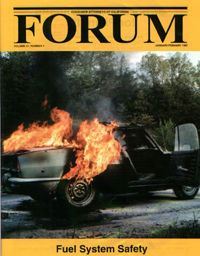 President’s Note: Mark S. Davis has shown a remarkable ability to improve the image of the Consumer Attorneys in the way he handles cases. If each of us adopted the methodology which Mark has developed in handling cases, we could collectively have a remarkable impact on improving the public image of the trial bar. – David S. Casey, Jr.

Not long after I graduated from law school, I handled an accident case which turned on a shopping center’s failure to install a crosswalk. Despite the defendant’s vehement contention that no crosswalk was required, within one week after the judgment was paid, I happened by the shopping center and to my delight observed the exact crosswalk I had urged being installed. It was a long time ago and I hardly remember the clients or the case. However, I still frequent the same shopping center and seldom pass that crosswalk without recalling that perhaps this small victory was a more important product of the civil justice system than was the money received by my client.

As trial lawyers, we owe an unwavering duty to our clients to achieve the best possible result. But our professional obligation does not end there. We are the custodians of the civil justice system and are charged with the responsibility of ensuring its viability and battling for its preservation. The decades of attacks on the tort system in general and trial lawyers in particular arise in part out of our own failure to remember that the civil justice system must deliver justice and not exist solely to be the cash register for our client’s injuries. We must navigate through the confusing wasters of the system to ensure that the result is one that not only provides fair compensation for our clients, but in some cases delivers “justice” in a non-monetary way.

Consider the public perception of the O.J. Simpson civil trial. The world was transfixed on the civil justice system as the ultimate arbiter of justice and unlike other wrongful death cases, the compensatory aspects of the case seemed almost lost in the intrigue as to whether O.J. would be found “guilty” in the civil trial. In other high profile cases, lawyers must search for non-monetary remedies to compliment their monetary recovery to improve safety as well as the perception of the system. If the lawyers in the McDonald's coffee case had been able to settle the case after the verdict to include an agreement from McDonald's to institute safety measures to avoid extraordinary temperatures in its coffee, the national headlines would have been quite different! If the settlement of the high profile sexual harassment case required top corporate executives to undergo education on the problems of the hostile workplace, the public perception of the civil justice system would be quite different. The media frequently centers on the amount of monetary compensation only because there is nothing else to report. In our settlements of high profile cases, we must provide a story of “justice” and not simply money.

Let me provide a few examples. A few years ago in a very highly publicized tragic accident in Honolulu caused by a drunk driver that resulted in deaths and serious injuries to teenage kids, the lawyers donated part of their fee to establish an outpatient clinic of the rehabilitation hospital bearing the name of one of the deceased children. The news articles dealt more with the good that had come out of the lawsuit than the large settlements paid to the families.

In another highly publicized case, we represented the family of an orthodox Jewish woman whose body had been desecrated by a local mortuary when the employees placed the carcass of a pig in the casket. As the shocking story unfolded in the media first before trial and then during trial, the case certainly appeared to many as involving issues more important the money. A substantial monetary settlement was reached during trial, but the defendants were also required to make a financial donation to the United States Holocaust Memorial Museum in Washington, D.C. with the memoriam “In Memory of (the deceased) so that her memory will survive as a symbol of triumph over ethnic and religious intolerance.” They were required to issue a formal written and signed apology entitled “An Apology to the Family of (the deceased)” which was published in Hawaii and west coast newspapers, and they were required to have all employees undergo a consciousness and sensitivity training on religious intolerance. Had the case been settled for money only, the parties, the attorneys, and especially the civil justice system would have appeared woefully inadequate at delivering “justice.”

When software mogul Bill Gates decided to get married on the small Hawaiian island of Lanai, owned mostly by Dole Foods Co., extraordinary measures were taken by Dole to ensure his privacy, including closing down major portions of the private and public areas of the island. Even local residents were excluded from public beaches. After a journalist for a CBS affiliate was arrested on a public road he had every right to enter and taken to the local police station in custody, a deafening public outcry ensued that prompted the Hawaii Attorney General to commence an action against Dole. We represented the journalist against Gates and Dole. Again after very highly publicized proceedings that seemed to center on the public’s right to access in this “company town,” a settlement was reached on the eve of trial. In addition to the monetary settlement in favor of the journalist, which remained confidential, Dole agreed to designate a portion of the proceeds, $25,000, to establish a college scholarship fund at the local high school. Another $25,000 was given to an activist community group to provide seed money for a community newsletter; and $10,000 was given to the Roscoe Pound Foundation in Washington D.C. so “it could further its work to protect punitive damages in the civil justice system.” Another defendant in the case, who served as Gates’ public relations representative, purchased 40 high tech computers and modems to make this rural high school’s computer lab the most advanced in the state. Several days later when the high school invited the journalist and I back to Lanai for an assembly to say “thank you,” we knew that the message we wanted communicated about the civil justice system came through loud and clear.

To make the civil justice system deliver “justice” is not only our unique responsibility as trial lawyers, but it is also easily obtainable. If each of us were to take a moment to remember why we pursued our careers, and if we remember to be creative, then we will make a difference.