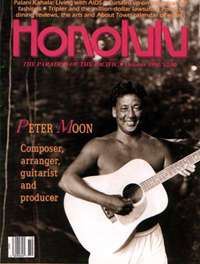 A case of bad medicine, or bad press?

Four-year-old Edward Chenault Jr. is severely brain-damaged, functions at the level of a 3 1/2 month-old baby, and will probably never walk or talk. He now lives with his parents in Orlando, Fla. Last March federal Judge Allan Kay found that Edward’s brain damage “was attributable to a lack of adequate oxygen caused by the failure of Tripler Army Medical Center personnel to timely and appropriately ventilate and oxygenate Edward. The court finds that proper oxygen therapy would have prevented Edward’s cardiac arrest and prevented his brain damage.” Judgment: $8.1 million, now on appeal.

Ten-year-old Yvonne Inigo is moderately mentally retarded. At age 5, when her malpractice case went to court, she was unable to tie her shoes, dress herself, wash herself, brush her teeth or speak. Her intellectual ability was not expected to progress beyond the fourth grade lever. On May 18, 1985 federal Judge Harold M. Fong found that Tripler “failed to conform to existing standards of care, which were designed to prevent neonatal asphyxia, hypoxia and mechanical birth trauma. Defendant’s failure was a substantial factor in bringing about Yvonne Inigo’s injuries, which in turn are responsible for her present condition.” Judgment: $1.2 million.

Lisa Leihua Little, 23 is profoundly physically and mentally handicapped, and has only limited use of her upper body. She must be cared for 24 hours a day. The Moanalua High graduate lives at home in Kane’ohe with her parents. According to court documents, Lisa possesses certain mental faculties and is aware that she is now significantly different from the way she was before she was treated at Tripler for a fractured arm and legs following a traffic accident. In October 1989, U.S. District Judge David Ezra found that Tripler “breached its duty to provide adequate medical care to Lisa Leihua Little by failing to aggressively and properly manage her respiratory care. Had Lisa received the proper oxygen therapy, she would, in all likelihood, have been normal today.” Judgment: $5.5 million.

In view of these and a handful of other multi-million-dollar judgments against Tripler Army Medical Center in recent years, questions inevitably arise: Is Tripler delivering substandard care? Does it deserve the moniker “Crippler,” as some users call it? Should Hawaii’s military personnel and their dependents think twice before seeking treatment at the Moanalua Ridge facility?

Military medical care in general has come under fire recently. In 1986 NBC News took a look at several instances of questionable care (the network called it “bad military medicine”). One medical case NBC examined occurred at Tripler. Congress has held hearings on the subject. And the Department of Defense itself has initiated studies to assess the quality of care at a number of military medical centers worldwide. One 1985 study of 23 medical facilities found deficiencies ranging from unqualified health care providers, to incomplete or missing patient files, to significantly elevated mortality rates at two unnamed hospitals.

A more recent Hard study, reported in the March 1990 issue of Medical Liability Advisory Service, found that the incidence of negligence in government hospitals, military as well as Veterans Administrations facilities, “was 50 percent higher than in non-profit institutions, such as hospitals affiliated with most medical schools. Moreover, it was three times as high as the rate in private, for-profit hospitals.”

Mark Davis’ first Tripler Case was Carolyn Louise Campbell. In 1978 Campbell, 29 and the mother of four, suffered a cardiac arrest while at Tripler – and a crucial instrument needed to help oxygenate her had no batteries. She was revived just short of death, severely brain-damaged. Campbell, who has since died, was awarded $2.4 million in 1982, touted then as the largest malpractice award ever against the U.S. government. (The record today is believed to be $15 million awarded in two Washington state cases.)

Davis says he gets one or two calls a week from unhappy Tripler patients. But because of a 1950 ruling called the Feres Doctrine, he has to turn down cases from active duty personnel. Intended to prevent virtual “sue-’em” chaos, especially during wartime, the doctrine prohibits active duty members of the military from bringing malpractice lawsuits against the federal government. So, roughly half of Tripler’s patient population, its active duty people, cannot sue.

Davis guesses that since 1980 he’s probably accepted between five and 10 cases a year – of military dependents and veterans and their dependents. Based on his Tripler experience, Davis says at the very least he would like to see Tripler improve its records management.

“I don’t think I’ve ever been involved in a case in which I felt that the record-keeping was what one would expect from a private hospital. The repeated excuse is that they don’t have time to prepare the records. We constantly see records that are just routinely lost. I have a case now where literally months of the client’s treatment records are gone.” Davis knows of instances where Tripler has allowed patients to take home their records and bring them back when they return – a practice, he says, unheard of in the private sector. In the 1986 NBC report, the commander of Tripler admitted that because of a serious shortage of clerical workers, the hospital had trouble keeping track of patient records.

The chances of something going wrong, says Davis, are increased if the patient sees a different doctor on each visit, a doctor who does not have the benefit of knowing the patient’s history, and can’t rely on that history being documented.

Davis also faults Tripler’s system of referring patients within the medical facility. He points to the case of retired Army Col. Alvan Parker, now deceased, whose cancer was diagnosed by a Tripler resident. The resident claimed he gave Parker a note referring him to another department for treatment. Parker said he never got the note, and therefore did not seek treatment. “The point is,” says Davis, “a place as massive as Tripler needs to have some system of follow-up. People are falling through the cracks.”

Another problem area, one for which Davis says he has no solution, is the intimidating effect of the military’s system of rank. “It’s very difficult for an enlisted man who spends 24 hours a day taking orders and responding to superiors to then go in and vigorously assert his position with a physician who is an officer. In some respects that’s what happened in the Malin case. Mrs. Malin, whose husband was a low-ranking enlisted man, was in the reception room in labor, and couldn’t get waited on for a couple of hours until she literally started delivering her baby. The nurses kept telling her husband, ‘Your wife has to wait her turn. This is on a first-come , first-served basis.’ When they finally got her into the examining room, they suddenly realized that the baby was not getting enough oxygen.” The baby, Melissa, is 6 today, walks with a limp and is mentally delayed, says Davis, because of the deprivation of oxygen. “If it was a colonel who had walked into Tripler with his wife, you can bet this would not have happened.”