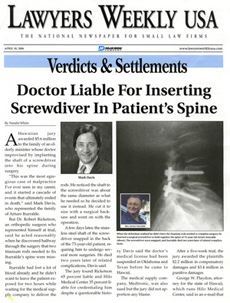 A Hawaiian jury awarded $5.6 million to the family of an elderly minister whose doctor improvised by implanting the shaft of a screwdriver into his spine during surgery.

"This was the most egregious case of malpractice I’ve ever seen in my career, and it started a cascade of events that ultimately ended in death", said Mark Davis, who represented the family of Arturo Iturralde.

But Dr. Robert Ricketson, an orthopedic surgeon who represented himself at trial, said he acted reasonably when he discovered halfway through the surgery that two titanium rods needed to fix Iturralde’s spine were missing.

Iturralde had lost a lot of blood already and he didn’t want to leave the patient exposed for two hours while waiting for the medical supply company to deliver the rods. He noticed the shaft to the screwdriver was about the same diameter as what he needed so he decided to use it instead. He cut it to size with a surgical hacksaw and went on with the operation.

"A few days later, the stainless steel shaft of the screwdriver snapped in the back of the 73-year-old patient, requiring him to undergo several more surgeries. He died two years later of related complications", Davis said.

The jury found Ricketson 65 percent liable and Hilo Medical Center 35 percent liable for credentialing him despite a questionable history. Davis said the doctor’s medical license had been suspended in Oklahoma and Texas before he came to Hawaii.

The medical supply company, Medtronic, was also sued but the jury did not apportion any blame.

After a five-week trial, the jury awarded the plaintiffs $2.2 million in compensatory damages and $3.4 million in punitive damages.

George W. Playdon, attorney for the state of Hawaii, which runs Hilo Medical Center, said in an e-mail that judgment had not been entered regarding the state.

There has been no judgment as to my clients, he said. The court has not ruled on our case and has asked for supplemental briefings.

"Based on the testimony of a whistleblower nurse, several nurses tried to dissuade Ricketson from using the stainless steel screwdriver shaft as a replacement for the titanium rods", Davis said. One nurse argued that the family needed to know about the substitution but testified that she was told not to tell relatives.

The rods were to be used to brace Iturralde’s back to take pressure off some nerves.

After the shaft snapped and had to be removed, the nurse retrieved the screwdriver part and took it to a lawyer, who sent it on to the family.

She was outraged by what happened. She had the courage to defy what she knew was not right, he said.

Each of the parties involved in the crisis contended that they were not to blame.

Hospital officials said they were not responsible for the doctor’s unorthodox surgical swap because it was not a foreseeable action.

But Davis argued that the hospital never should have permitted Ricketson to do surgery.

"There had been a host of disciplinary problems and disciplinary actions against him arising out of his addiction to narcotics", Davis said. "My pitch to the jury in closing argument was: Here is a guy who keeps hopping from jurisdiction to jurisdiction, and the jury has to send a message to him and the hospital that the community feels betrayed".

The defendants also argued at trial that Iturralde was not seriously injured by the surgical incident and that the patient’s medical complications and subsequent death were the result of other serious health problems, including heart disease and diabetes.

As for Ricketson, he told the jury it was not his job to inventory the items needed for the operation, and that the nursing team should have done that.

"But a medical ethicist testified that Ricketson never should have implanted the stainless steel shaft into a person," Davis said. "While titanium has been approved for implanting in a human body, stainless steel has not. The ethicist, also a surgeon, said the doctor should have stopped the operation."

He said the doctor is responsible for making sure all the appropriate equipment and devices are there. In this case, when it was apparent he didn’t, then he should have closed and taken the patient back into the operating room the following morning, Davis said.

Ricketson is solely responsible for the punitive portion of the verdict since Hawaiian law prevents punitive damages from being awarded against hospitals. Recovering the award may be difficult since Ricketson had no malpractice insurance, Davis said.