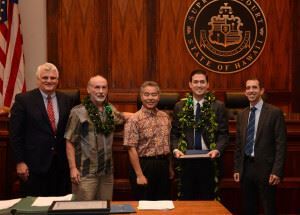 The Hawaii Access to Justice Commission’s Pro Bono Celebration was held at the Hawaii Supreme Court on October 29, 2015. Governor David Y. Ige, Chief Justice Mark E. Recktenwald, and Supreme Court Associate Justice Simeon Acoba (ret.) presided over the ceremony and expressed their appreciation to individuals who worked to promote the access to justice in Hawaii.

Matthew Winter of Davis Levin Livingston was recognized as a 2015 Pro Bono Honoree for his extensive pro bono work with the American Civil Liberties Union (ACLU). He was given an award for Outstanding Pro Bono Service by the Hawaii Access to Justice Commission and Hawaii State Bar Association, and he was also awarded a Certificate of Special Recognition by Governor David Y. Ige.

During his career with Davis Levin Livingston, Mr. Winter has committed himself to do extensive pro bono work with the American Civil Liberties Union of Hawaii, particularly where individuals have been cited by the police for exercising their First Amendment rights. He defended two individuals who were cited by police for protesting while topless in Waikiki; although there is no law against being topless, the police (incorrectly) said they needed a permit to do so. After having the criminal charges dismissed, he helped to negotiate policy changes for future protests.

Not long thereafter, he began working on a case – lasting nearly two years – involving the First Amendment right to distribute religious leaflets on a public sidewalk. While that case was still going on, he agreed to represent a homeless individual who was cited under a County ordinance for holding up a sign (asking passersby for help) by the side of the road; after working to dismiss the criminal charges, Mr. Winter then served as co-counsel on the civil suit to have the ordinance declared unconstitutional. He also serves on the ACLU of Hawaii’s Litigation Committee, advising the ACLU’s legal team on potential and ongoing litigation.

As Daniel Gluck, Legal Director for the ACLU of Hawaii, explains: “When Matt agrees to take on a case, he commits to it fully and completely. He does the hard work to move cases forward – he’s put in countless pro bono hours – and he’s the first one to say, ‘Don’t worry about it, I’ll take care of it.’ He’s a great lawyer – he’s very smart, and he’s a fierce advocate for constitutional rights. He’s also one of the nicest people I’ve ever had the pleasure to work with, and the ACLU of Hawaii is lucky to have him as a dedicated pro bono attorney.”