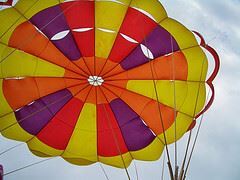 Our state has one of the largest tourist economies in the country. Our unique culture and beautiful natural landscapes bring visitors from all across the globe. Both they and our local residents take full advantage of our natural assets by partaking in a whole host of outdoor activities. One such activity is parasailing. And while parasailing can be extremely enjoyable, those who partake also run the risk of being involved in serious accidents. While some of those accidents may be unavoidable, some of the injuries or wrongful deaths are the fault of the negligence of others. What is odd is that, unlike sister parasailing state Florida, Hawaii does not have any specific parasailing regulations on the books.

NTSB Says We Should Put Parasailing Regulations in Place

The National Transportation Safety Board (NTSB) urged the Coast Guard to create nationwide parasailing regulations, in part because of an accident that occurred right here in Hawaii, reports Hawaii News Now. The NTSB called the sport risky and cited eight serious accidents in a mere four years that resulted in eight deaths. One serious accident in Florida involved a teenaged girl whose tow line snapped, allowing the wind to smash her and her friend into a 13-story building. The NTSB report noted that in all but one of the cases of serious parasailing accidents some sort of equipment failed. So the goal is to put regulations in place that would address these equipment errors. According to a report by Forbes Magazine, tying knots in towlines can significantly weaken the line, leading to deadly accidents, so one possible regulation would be to bar these knots.

One thing that makes it difficult to understand why Hawaii has not passed such regulations is that the Florida Senate unanimously passed regulations earlier this year, according to CBS Miami. FOX Orlando reports that one of the bills passed the house and went so far as to ban parasailing when there is a wind speed exceeding 20 miles per hour. The full text of the law is available here.

How Many People Have Been Injured?

The Parasail Safety Council told the Star Advisor that approximately 73 people died in parasailing accidents between 1982 and 2012 and that in that time, 429 people were seriously injured. The founder of the organization, Mark McCulloh, supports proposals to have the Coast Guard licensed operators.

So Why Isn’t Hawaii Regulating Parasailing?

It is hard to say why Hawaii is not regulating parasailing. An accident that occurred here in January of 2012 seriously injured one man and killed another. Perhaps the issue is that, while these deaths are preventable with fairly simple regulations, there just have not been enough of them to grab our legislature’s attention. Alternatively, it could be a matter of waiting for the Coast Guard to step in and take action on a national level so that our parasailing operators will be held to the same standard as other operators throughout the country. Whatever the reason, until such regulations are in place there are serious risks that come along with this activity of which outdoor sports enthusiasts need to be aware.

Parasailing accident victims should not sit idly by, however; instead, we encourage all of those who have been injured in such a tragedy to contact us at Davis Levin Livingston. We can help you acquire the compensation you deserve for the injuries you sustained in your accident.