Approximately 150 people a week illegally climb the Haiku Stairs, also known as the Stairway to Heaven. Located on Oahu, the 3,992 steep steps lead to a now-defunct radio tower that sits atop Puu Keahiakahoe in the Ko’olau mountain range. Reports are that the views from the stairway to heaven staircase trail and the tower at the top are remarkable and well worth the unlawful climb up the unmaintained and partially broken stairway.

The steps are approximately 4,000 feet in length. They were built in 1942 to provide a trail to the top for the building of a Navy tower, the Haiku Radio Station. The tower was subsequently used to transmit radio signals to ships that were navigating the Pacific Ocean.

The Coast Guard took over the tower in 1973 and replaced the wooden stairs with metal ones. In 1987, vandalism caused several portions of the stairs to fall down the mountain. As a result, the trail was closed to the public. Nearly $1 million was spent in 2003 to repair the stairs, but land usage rights have been in dispute, so the stairs have never been reopened to the public.

The steps are on land partially owned by the Bureau of Water Supply (BWS). The BWS wants to destroy the steps and plans on spending half a million dollars just to determine how the demolition will occur. Meanwhile, members of an organization, “The Friends of Haiku Stairs” want the stairs to be repaired. The Friends hope to convince another agency to fix and take over the management of the stairway and reopen it to the public. The BWS is willing to turn the steps over to another organization and has even offered them to the National Parks Service which declined to accept them. 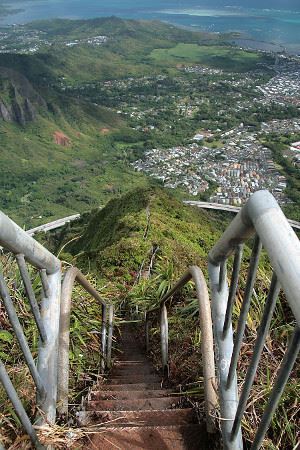 The BWS argues that the steps are even more dangerous than they used to be due to strong February winds that uprooted trees and damaged more of the steps. In order to protect BWS from legal liability if anyone is injured while climbing the steps, it has posted many warning signs informing hikers of the dangers and telling them it is illegal to climb the stairway. In addition, the BWS pays approximately $167,000 a year in wages to security guards to keep climbers off the trail. Even so, in the six month period between June and December 2014, 135 people were issued citations for illegally climbing the stairs and another 100 were given warnings. Six were arrested. This does not count the large numbers of people who sneak past the guards and climb the stairs unnoticed.

Residents who live near the steps have complained about too many cars parked on their streets and foot traffic damaging their property. They have also claimed that they have been confronted and verbally and physically assaulted by hikers headed to the Stairway to Heaven. Despite all the potential liability problems, in addition to the Friends of Haiku Stairs who want them reopened, if the liability problems can be resolved, the Mayor of the City of Honolulu would also like reopen the Stairway.

Under Hawaii law, as long as the BWS continues in its efforts to warn potential climbers of the danger of the steps, it should not be liable for injuries suffered by the illegal climbers. Almost all rules have exceptions, so if you were injured while illegally climbing the Haiku Steps, give us a call today at Davis Levin Livingston for a free consultation to discuss the specific facts of your personal injury or wrongful death case.